It’s been said that one dare not ‘hassle the Hoff’; but one look at the six foot six and around 110 keg frame of big Jim Coe is enough to be sure it’s best not to hassle him either! And yet, JON RAWLINSON, recently dared to hassle Jim (just a little!) in efforts to learn more about this Kiwi bloke’s bay-watching duties at Karioitahi Beach. 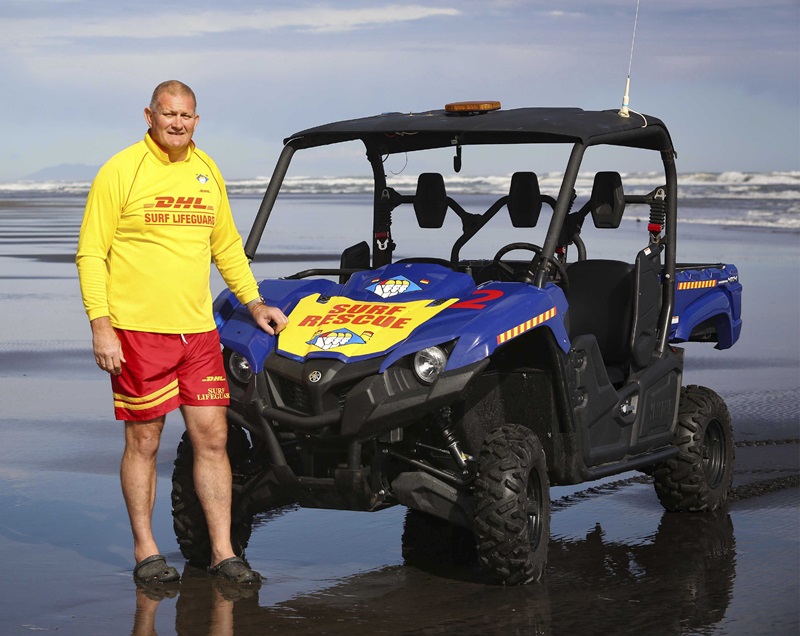 He may have hung up his (no doubt) rather large boots some 20 years ago, but Glenbrook’s Jim Coe hasn’t given the game away when it comes to sport just yet. However, the former Counties Manukau Steeler and NZ Maori lock is quick to point out that surf lifesaving is far more than just a sport.

“When people refer to it as a sport, I cringe a little bit. First and foremost it’s an essential emergency service and when there’s an emergency it’s all hands on deck,” he says.
“That said, the sport aspect is a great recruitment tool. Like rugby, surf lifesaving is very much a team game; as an individual, you get out what you put in. And, with any sport, my philosophy is that you’re not there to participate, you’re there to win.”

The Karioitahi Surf Club president has been saving lives at the busy Franklin beach for almost 40 years. Jim’s sporting skills, as well as those learnt at the ‘coalface’ at Glenbrook Steel Mill, proved transferable in this regard.

“It takes quite a bit of strength to swim through surf. That gave me a base level of fitness for rugby. Then, when the rugby finished, I’d carry that fitness into the surf season again. For me, the transition between the two was seamless.”

Jim says management and leadership skills, gleaned while working for New Zealand Steel, have been invaluable to him in running the surf club. And, his farming background has also kept him fighting fit. In fact, it enabled him to first take to the surf like a duck – albeit he’s now a very big bird, indeed – to water.

“Growing up on the farm provided a real outdoor lifestyle. The beach and a lake [Puketi] weren’t far from the house. Dad [Lawrie] was involved with setting up the surf lifesaving club, so I’ve been there since I was a nipper. It was natural that I became a lifeguard.”

Last year, due to his parents’ ill health, Jim returned to help out on the Coe farm – where four generations have worked the land. However, along with his wife, Judith, and children, Tara and Aaron (both qualified lifeguards), Jim still devotes plenty of energy to the surf club, proving that a family which saves together, stays together.

“I’m still actively patrolling. Last year, I did about 125 hours and performed rescues. There’s always competition with younger ones keen to beat the old fulla!”
Early this year, Jim’s team (including the old fullas) were pushed to their limit when a “perfect storm” brewed at Karioitahi.

“A woman was swimming and got into difficulty [and] we also had a search for two others – we weren’t certain if they were on land or in the water,” he recalls. “And, if that wasn’t enough, we then had a head-on collision between two motorbikes on the beach. Those incidents together really stretched our services and put our skills into practice.”

Fortunately, the team rose to the challenge, later earning the club the Northern Region ‘Rescue of the Year’ award. “Winning [rugby] games with Counties was great because it meant all that training resulted in points on the board. This type of situation was similar; our training resulted in three or four families ending up with their loved ones coming home, so you could say that was a win for us too.”

Ensuring his team remains on their game is of utmost importance to Jim. To this end, his current focus involves planning a new club building. He expects ground to be broken in 2019.

“We just don’t have enough room! The current club was built for about 40 or 50 people; we now have more than 150 members and growing, which is a good headache to have. The new building will better accommodate the guard, give us a tower up another level and provide a better view up and down the coast,” he confirms.

“Karioitahi is close to a major population centre, South Auckland, and the number of people going out there is increasing so we need to meet that challenge. It all comes down to saving lives; we’ll do whatever we can to make that happen.”

Solid as a lock

John Henry may have been a ‘steel driving man’ however, with more than 100 games for the Counties Manukau Steelers (and by working more than 30 years in the steel industry), Jim Coe is well worthy of the moniker too.

In fact, if the Mitre 10 Cup (the NPC in old money) is rugby’s backbone, then it’s men like Jim who form its vertebrae.

“I came through the same era as old Pine Tree [Meads]. It was hard, physical rugby. There was plenty of mud and no cameras around. You stood there, toe to toe with your opposite, and basically beat the shit out of each other until someone gave in!” he grins.

While the sun set on his playing days as it rose on professionalism, Jim did manage to reap some financial reward by joining, rather than battling against, the likes of the original Blues brothers, Robyn and Zinzan Brooke.

“I played a few games for the Blues which gave me enough money to buy a boat. I was also working [at Glenbrook Mill] so it made for some long days. It’s always nice to have money, but it was never about that for me; I just played rugby for the love of it.

“I had offers to play overseas but I enjoyed my summertime here (and my surf lifesaving) so much that I wasn’t keen to swap it for another six months a year of being covered in shit!”

While professionalism may have changed the game, Jim believes success still comes down to mastering the fundamentals.

“When I was coaching, I’d see kids trying all these fancy moves, but they have to develop the basics, simple catching, passing and tackling, first. You just have to do it, and do it until the cows come home if you ever want to play with the big boys.”

“I thought about it but, no. I don’t mind offering a bit of technical help every now and then but these days my main interest is the surf club. Now I’m semi-retired, it allows more time for fishing and, like Beaver [Stephen Donald], I do plenty of white baiting as well, then there’s the farm to manage, too.”

These days, big Jim Coe is just one of many fans in the stands cheering for the home team.
“You have an extra local parochialism [with the Mitre10 Cup]. You’ll always get the union die-hards turning up to every game; no matter the conditions they’ll be there every weekend.

“I’m still Counties through and through and go to support the team whenever I can. It’s the same as it was when we were playing; it’s all about belief in the colours.”

A code of their own