Last month I touched on the power of myth in the pest control world and how easily this can be accepted by innocent people just wanting an answer. 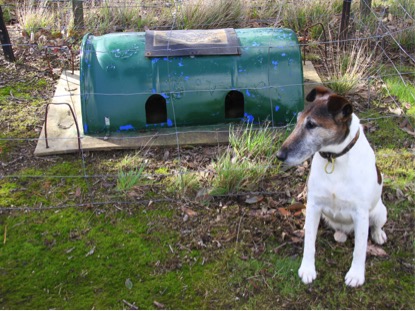 There are loads of examples out there; one of my longtime favourites would have to be the plastic bottles filled with water placed in the garden to stop cats doing their business among flowers and vegetables.

I know, right? Way too easy?

Yep, this was started as a practical joke but was quickly adopted by people the world over who were desperate to find an answer to smelly

problems in the garden. Needless to say, bottles of water do not stop cats going to the toilet, but there are literally thousands of gardens in Auckland,
alone, sporting a bottle every few metres. They still endure cat droppings but now also have unsightly old bottles lying around, all placed by well-meaning people who just wanted a nice garden.

Another case in point can be seen in the attached photo. This rather dubious device has sprung up in a reserve close to my home and claims to be the latest and greatest in rabbit control. It is simply a plastic drum cut in half with a couple of plates of rabbit poison inside
then ring-fenced to keep everything but rabbits out – voila!

Too easy? Well, err, actually no. There are very few rabbits on this particular reserve. I’ve only ever seen five and, despite this contraption being there for months, the bunnies are still quite safe and happy.

Rabbits are scatter feeders, meaning they don’t like to feed at one focal point. They are also extremely sedentary (meaning localised) as most rabbits will live their entire lives within an area of just 200 square metres.

Add to this the well known fear among rabbits of novel (new) objects and it is obvious that any forms of bait station simply will not work. What’s more, even if they could, they would need to be placed at very regular intervals to attract rabbits living and using each individual area not, as in this case, with one station in the corner of a 20-hectare reserve. Funny, huh?

Not so funny is the fact that you and I are paying for this. As taxpayers we deserve to know that our local authority is applying quality pest control in a cost-efficient manner.

Such authorities are supposed to be managing our reserves with our money for our benefit. Don’t get me wrong, Auckland Council does a lot of great work and seldom gets it wrong; in this case there is clearly a contract manager who, perhaps, does not understand the subject matter, being led by a contractor with the same problem.

This reserve had a very low level rabbit population, so low, in fact, I could have removed every rabbit there using standard methods in less time than it took to roll the drum in and erect the ring fence.

This particular method has been rolled from reserve to reserve without fixing any problems along the way. Clearly another myth has been accepted – New Zealand world leaders in pest control? Sometimes, I do wonder.

Cattle breeder in a right pickle