More than one pedigree puss will strut its stuff, flipping a tail at the crowd along the way, during Hamilton Cat Club’s all breeds show.

All are welcome, however moggies and doggies best stay home.

Less than a week after the Waikato Wedding Expo, Hamilton will host the Waikato Baby Expo. Coincidence?

Yes! We have it on good authority that no ‘encouragement’ was needed for the former to run thanks to the impending arrival of the latter. With a huge range of products and services showcased to help parents provide for the littlest members of the family, this expo is ready to run soon.

If there’s cash in the attic, it’s high time it came down! Locals might find their knickknacks are worth a fortune when valued at this year’s antiques fair. Beginning with an early preview and purchase evening on July 7 (from 7.30pm), the fair continues throughout the weekend (10am-4pm).

Some brides might be happy enough to get married in a shed; for others, there’s the Wild Hearts Wedding Fair at Shed 10. From runway shows, to shopping, live music and food, as well as plenty of inspiring ideas to make that big day bigger, this event allows imagination to run wild.

Food takes centre stage this month with tempting morsels available to sample, and cooking demonstrations from such chefs as Annabelle White, Simon Gault, Ray McVinnie and Annabel Langbein. Whether you’d prefer to amble along Cheese Alley, or stumble down Brewer’s Lane, The Food Show is probably right up your street.

Four Fathers are better than one at Christmas – well, with all those toys to deliver, Father Christmas could use a hand! But even during mid-winter Christmas celebrations they’re pretty useful too. A local favourite, this band is, once again, expected to impress (jingle bell) rocking out the hits.

This month, the full Auckland Philharmonia Orchestra (APO) will provide an hour-long performance of classical favourites. In addition, audiences will have the opportunity to be up close and personal with musicians during this free family event.

While some may have farewelled Herman and co long ago, it appears this ‘60s band is still kicking up their heels – well, they’re still alive and kicking at least! And, in June, the band will restage its British invasion of New Zealand for the final time, with hits such as Mrs. Brown, you’ve got a lovely daughter, No milk today, I’m Henry VIII and There’s a kind of hush.

From lost moa roaming the foothills, to faeries drinking moonshine out of the back of Mitre 10, there are plenty of Kiwi ‘characters’ in this deliciously devilish play. Suitable for audiences aged seven and up, this twisting tale draws on puppetry, shadow play and live music to tell the story of a young woman who strays from the beaten track and down a paper road.

A step up for young performers, Howick Dance Studio’s next big production is set to showcase plenty of twinkling toes – and a tail too! Presenting a classic story (originally penned by Hans Christian Anderson), these young dancers will give four performances – from 2pm and 6pm on July 1, 1pm and 5pm on July 2.

The doctor is in! Theodor Seuss Geisel (aka Doctor Seuss) may have left this life but his wacky imagination is still running riot. This month, Hawkins Youth Theatre Company presents a play full of song, dance, live music and delicious rhymes, which also provides a most important ecological message. If, indeed, everyone does need a Thneed, then they have to know how this story goes!

When the late, great Leonard Cohen first sang Hallelujah, we don’t think this is quite what he had in mind! 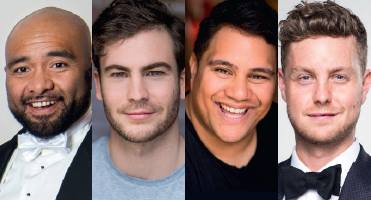 However, during this performance, five fabulous male singers will blast out iconic songs, ranging from power ballads to Rat Pack croons. Amen to that, sister!

Just when we thought Basil couldn’t topple any further, this dinner theatre show (based on the TV series) is set to return to the Red Shed this month. Details via redshedpalazzo.co.nz/dinner-theatre.

Striking images from some of the world’s best photographers will be displayed all July at Auckland City’s Smith and Caughey’s store. Featuring award-winning works by photojournalists this exhibition provides a unique perspective on the way we view our world. Proceeds will assist a range of charities. More details via aucklandrotary.org.nz.

Making a scene is actively encouraged when it comes to seeing our stories on screen. From July 20, the NZIFF will show an eclectic mix of films from New Zealand and abroad.

From documentaries to features and shorts, this annual event again expects to deliver something for film fans from many walks of life. For a full schedule, see nziff.co.nz.

Boasting picturesque scenery, these run/walk courses (ranging from 5km to 20km plus) are designed to take in the majesty of the mighty Waikato River and the wonderful Waiuku Forest. Courses are suited to participants of varying fitness and age.

However, for those who aren’t quite so aux fait with life in the fast lane, this event is still well worth a look. With plenty of high octane fun on offer, the CRC Speedshow is sure to ignite fresh passions and get your engine running.