Thoroughbred racing has long been a sport on the move. However, by embracing modern technology, a new move in the big business of high stakes horse trading could prove a winning formula. JON RAWLINSON explains. 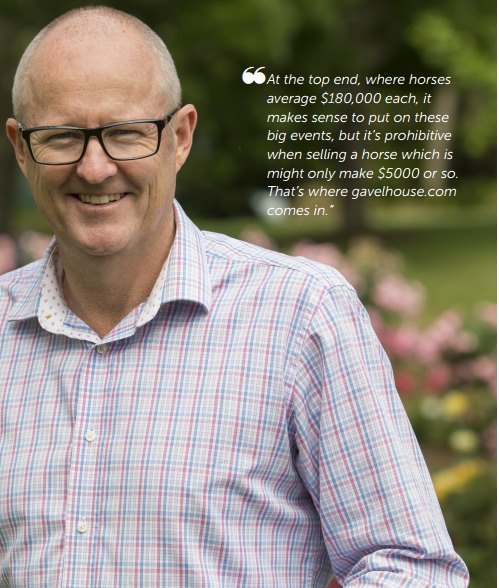 In life, sport and in business, rich rewards are born of risk. So, rather than play it safe and stick with ‘sure things’, Karaka-based New Zealand Bloodstock (NZB) has put its money on the line, betting that a new way of horse trading will hit the nail on the head with its clients.

However, Andrew believes Gavelhouse.com offers a more cost effective option to buyers and sellers of lower priced bloodstock, such as untried horses, foals, brood mares, weanlings, or even stallion shares and services.

“It’s expensive for us to run a sale here at Karaka and it’s expensive (when you consider such factors as transport costs, travel and accommodation for staff) for many to come up from the South Island, or elsewhere in the world, to buy or sell.

This way, they don’t have to. At the top end, where horses average $180,000 each, it makes sense to put on these big events, but it’s prohibitive when selling a horse which might only make $5000 or so. That’s where Gavelhouse.com comes in.”

Purchases through the site don’t need to be made ‘sight unseen’. Andrew confirms that photos, videos, vet reports and other information can be provided and buyers can still arrange viewings without horses leaving their home paddocks.

❝We take only the very occasional bet and leave the care of horses and the running of our operation to the experts. I keep the farm up to scratch and enjoy it; working outdoors is a far cry from employing 400 staff in New Zealand’s largest supermarket!”

“Buyers can arrange to see horses beforehand and I’d be surprised if, for the higher value ones, they don’t. When you’re buying bloodstock, you can do your due diligence, do your homework, do your study to mitigate the risk, but it’s still always a risk.”

Despite Gavelhouse.com focusing on the middle to lower end of the market, Andrew concedes that it could well take food from NZB’s trough, in a manner of speaking.

“It’ll affect some of our sales by as much as 20% in terms of numbers, but our traditional sales certainly aren’t going to fall over. During our Yearling Sales we sell more than $100 million in bloodstock.

It’s a brilliant event when people from all over the world converge on Karaka to buy some of the best horses money can buy; that’s not going to change.”

Andrew is betting that an overall increase in the number of lots should more than offset any reduction in business NZB could experience at its traditional sales.

In addition to attracting more buyers and sellers – those who wouldn’t usually travel to Karaka – the Kiwi company expects to net business across the ditch as Gavelhouse.com undertakes a homecoming of sorts.

“Gavelhouse.com was initially Australian owned but it just operated as a listing-based website through which people would advertise their horses. It was up to the buyer and seller to negotiate between themselves,” Andrew explains. “We initially kept it as a listing site but that didn’t really work. So, we developed it into a full auction site.”

In November, Gavelhouse.com returned to the Australian market to challenge two long-established auction houses (Magic Millions and Inglis) which run monthly, traditional sales. However, as in NZ, it will target the mid-lower end of the market.

“We’ve never earned a dollar over there, but now we can really start earning some money. As people cotton on that Gavelhouse.com is backed by NZB, we’re expecting it to take off. We have a good reputation in Australia.

It’s a challenge, but we’re confident that it will do well there.” Should the company stake its claim successfully in Australia, further markets could soon beckon.

“The beauty of Gavelhouse.com is that we can take it anywhere in the world,” Andrew says.

“We don’t want to run before we can walk but, once we’re happy with how things are going in Oz, we’ll look closely at other markets. The next could be South Africa; it could work well there.

“Beyond that, we might look at England, Ireland and even the USA. There are some big players there but not so much in terms of online auction sites.”

Too often, in sport, it’s flash Harrys who are best remembered. And yet, while he credits legendary thoroughbreds such as Phar Lap and Bonecrusher, a dark horse shines above others for NZB director, Andrew Seabrook.

“My favourite race horse was Rough Habit,” he says. “He was a bit of an ugly duckling, an averagely-bred horse from the Hawkes Bay. But he went on to win 29 races – 11 Group Ones – on both sides of the Tasman and in Japan. Hard track, soft track, heavy tracks, any distance, Rough Habit had a great heart; that’s important in a champion.”

Born into a racing family in Karapiro, Andrew has a life-long association with horses, although he could be considered somewhat the dark horse himself – he doesn’t ride and initially pursued accountancy.

“I rode a little when I was younger and had a pony but I wasn’t really into it. I was more into ball sports, particularly tennis.”

However, Andrew says he enjoyed a flutter, much to his parents’ distress.

“My father [Richard] – who’s recently retired from the industry’s Judicial Control Authority – used to take me to the races every Saturday. Kids weren’t allowed in the grandstands, so I’d sit on the bank at Te Rapa; I loved it!”

Despite studying accounting and finance at the University of Waikato, it was front line horse sense, rather than playing by the numbers, that Andrew’s first (and only) employer required.

“I was saved from becoming an accountant!” he laughs. “I started with NZB straight out of university, back when it was known as Wrightson Bloodstock. I began in the pedigree department, researching and helping compile sales catalogues – accounting skills weren’t needed. I was then out on the road as an agent for about four years, looking at horses and dealing with clients face to face.”

Today, this former Karapiro kid may hold the reins at NZB but, as he’s also a director of the Auckland Racing Club, he’s often back at the track.

“I attend just about every meeting at Ellerslie and travel to races worldwide. It’s a fantastic sport and wonderful to be a part of the action.”

“We sold 290 two-year olds for approximately $28 million during the Ready to Run Sale in November and our turnover increased $5 million on last year, which was very encouraging,” he says.

“This gives us a pretty good feel as to what we can expect from the National Yearling Sales, so I’m cautiously optimistic.”

The programme starts with the Premier Sale (January 30-31) at NZB’s Karaka Sales Centre, followed by the Select and Festival sales, on February 1-3 and 5, respectively. Full details are available via nzb.co.nz.

While the bloodstock industry was hit by the Global Financial Crisis, it has rallied well since.
“It took us about three years to recover,” Andrew says, “but we’ve seen steady growth and 2016 was a very good year, so we’re hitting our stride again now.”