More than 20,000 New Zealanders are thought to live with the debilitating disorder, Chronic Fatigue Syndrome (CFS/ME) which has baffled experts and patients alike for many years. 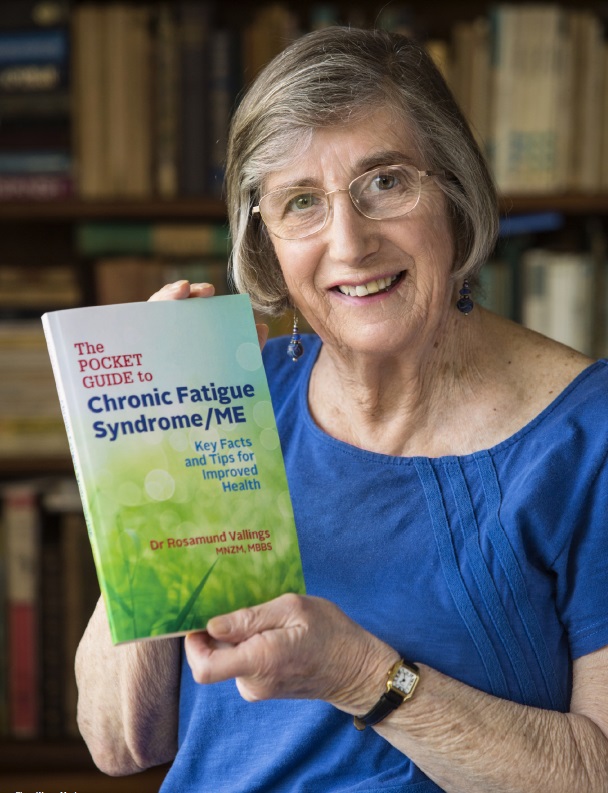 However, world leading, CFS/ME specialist, Dr Rosamund Vallings has been a lifeline for many sufferers and recently she produced her third book on the subject, The Pocket Guide to Chronic Fatigue Syndrome/ME.

Dr Vallings has been instrumental in helping many patients manage their symptoms and to understand exactly what is going on with their bodies.

“Sufferers can feel socially isolated and depressed so, a good network of support is essential,” she says.

A Clevedon local, Dr Vallings was made a member of the New Zealand Order of Merit in 2008 for services to Chronic Fatigue Syndrome, is a past nominee for NZ Woman of the Year and last year was recipient of the Nelson Gantz Award for Outstanding Clinician by the International Association of CFS/ME.

Rural Living leaned Over The Gate to ask her about her work.

How long have you lived in Clevedon?
I lived in Bucklands Beach from 1967 and moved to Clevedon 22 years ago, attracted by the more rural lifestyle.

Do you live on a lifestyle block?
Yes, we have 50 acres, mostly native bush. We also have 12 Wiltshire sheep, and we breed from them each year. We grow most of our own fruit and veges.

We understand you first learnt of CFS/ME while studying in the UK. What was it about this condition which inspired you to learn more?
I learnt about this illness at medical school in London, then known as Royal Free Disease. I unexpectedly became involved in some CFS/ME research after settling here in Auckland, which inspired me to further my studies.

When did you start practising as a GP in Bucklands Beach?
50 years ago in 1967 – I slowly built up my own practice.

How long have you been practising at Howick Health and Medical?
I joined there with Dr Ray Khoo and colleagues in 2005.

We understand one of your patients is former Rugby League player, Richie Barnett, who is now a spokesperson for ANZMES (Associated New Zealand ME Society). How important is it that high profile people who are affected step forward to raise awareness?
Very important, particularly having someone like Richie, who eloquently describes how he became ill and then managed his health to achieve a good level of health.

How closely do you work with organisations such as ANZMES and how vital is their role?
I am their medical advisor, and I work very closely with them. It is very important to have a lead organisation to raise awareness, provide accurate information and to support the many patients and families with this illness.

In brief, why did you decide to write your book, The Pocket Guide to Chronic Fatigue Syndrome/ME?
I had already written two books about the illness, one a complete overview and then one for teens. I felt the time had come for a shorter, easy-to-read version which was right up to date with the latest exciting research.

Since its release earlier this year, how well has it been received?
It has been very popularly received.

Considering these conditions affect more than 20,000 Kiwis, is the Ministry of Health doing enough to support research and treatment?
I think the MOH has been very supportive. There will never be enough money for research/treatment in medicine. But I would like to see dedicated CFS/ME clinics established in main centres. Many patients with this complex illness go undiagnosed, or cannot afford to pay for private advice and treatment.

We understand the condition’s first symptoms often present as extreme mental and physical exhaustion, muscle pain, headaches, sleep problems and enlarged lymph nodes. Physical or mental stress can make a person more vulnerable. As such symptoms are quite common, how difficult is CFS/ME to diagnose?
Yes, this illness is very difficult to diagnose as the symptoms are common in general practice. One has to go through a long process of eliminating other medical conditions and there are often time constraints in a GP consultation which also makes it difficult.

Do many people in New Zealand go through life unaware of their condition?
A lot of people never get a firm diagnosis, although awareness is improving. There is more teaching about the illness in medical schools and ongoing post-graduate medical education. Patients do need ongoing surveillance too.

How can it be treated? Will it ever be cured?
The patient needs to have an accurate diagnosis and then a management plan established, which will enhance their chances of improved health, and ability to live a reasonably normal life.

Some recover completely but, some patients do not get better, and some are very seriously ill. I do not think at this stage we should be using the word “cure” – it is more a case of doing everything we know to manage the illness, relying on accurate research, appropriate medication etc.

You were 2016’s Nelson Gantz Award winner for Outstanding Clinician by the International Association for CFS/ME and you are a member of the New Zealand Order of Merit. How valued were those honours and do they assist in spreading awareness of your work?
They seem to have been very positively acknowledged, and the publicity has increased awareness of the illness, not just in New Zealand but internationally. As a result, I have become busier than ever!

If you could grow any plant or raise any animal (real or imagined), what and why?
I would grow more kowhai trees to attract tuis and native pigeons. I would also raise another Jack Russell terrier – a wonderful intelligent companion, and animals such as this are great for stress relief!

If you could be Minister for Health for one day, what would you do first?
I would try to reduce some of the bureaucracy!

If you could invite any three doctors (living or dead, MDs or PHDs) to dinner, who and why?
Dr Alice Bush – an outstanding NZ paediatrician, whose wisdom supported and guided me as a young doctor when I first came to New Zealand in 1966.
Dr Melvin Ramsey – who first wrote about Royal Free Disease in 1955 in London
Dr Sarah Dalziel (my GP daughter) – a wonderful cook who could produce the meal.

And, if I could invite one other person I would include Hammurabi – an ancient Babylonian philosopher and emperor who accurately described ME/CFS in the 18th century BC! (He may not have been a doctor).

Cattle breeder in a right pickle