Some of the most important lessons our children learn aren’t always taught in a classroom and, at least one Pukekohe kindergarten is proving that Mother Nature knows best. ANGELA KEMP donned her gumboots and joined local babes in the bush.

On one of the wettest days of the wettest weeks of winter, I joined 10 pre-schoolers and their teachers on a Nature Discovery programme. They were from Mason Avenue Kindergarten and, unlike me, totally unfazed by the atrocious weather.

Decked out in bright orange waterproof gear (donated by Pukekohe Grower Supplies), backpacks bursting with essential snacks, the little trampers were eager to begin their adventure in a bush area of farmland on Ray Wright Road belonging to John and Maree Bernasconi.

These friendly farmer have been welcoming groups from the kindy for the past two years since being approached by head teacher, Judi Sixsmith, who along with fellow teacher, Kim Pearson, devised the nature discovery programme.

Each week the 10 oldest children from the kindergarten visit the bush where they spend a fun-filled day in the great outdoors and they love it. Nobody is more thrilled at its success than Judi who says research has shown that teaching children about their environment and encouraging them to spend time outdoors pays great dividends.

“If you instil that love for nature in children at a young age then they will always carry it with them,” says Judi. “Both Kim and I really love the outdoors and are passionate about the positive qualities it brings out in the children.”

The pair believe giving children regular, positive interactions within nature helps them develop respect and a caring attitude for the environment. Also, watching adults – parents and teachers – encouraging children’s enjoyment, sense of comfort and respect for nature, on a regular basis is important to these outdoor experiences.

A similar scheme is run by Tuakau Kindergarten and Judi said she and Kim had taken ideas from there along with some from Fiordland Kindergarten in the South Island to create Mason Avenue’s unique programme.

“It has meant extra fundraising for us but we place high value on what we are doing and feel it is a really important part of what we offer children and their families at our kindergarten.

“We have had great support from many Pukekohe businesses as well as parents and other family members.”

This has included making and supplying rat and possum traps, a weta ‘hotel’, fire safety equipment and a large wooden crate to keep equipment in.

The children are driven to the bush area courtesy of the Franklin Club which lends its minibus to the kindergarten every Tuesday.

A shell path leads from a paddock to a large clearing in the bush, the start marked by a newly-planted kauri. At its centre, log stumps are arranged around a camp fire area which Judi encircles with a thick blue rope delineating the “safety bubble” area.

There are a few rules in which the children are well drilled including never to step over the rope, or safety bubble as it’s known, to go to the toilet behind a tree and, if lost, to hug a tree and call out ‘kiwi, kiwi’ until someone finds them.

Conservation work is an important part of the visit with the youngsters helping to check and bait possum and rat traps and keeping a watchful eye on the weta ‘hotel’.

Furthermore, as the children wend their way through the bush they are often accompanied by a fantail they’ve christened, Thunder.

“Through caring for nature and wildlife they not only learn about conservation but also gain valuable life skills such as risk taking, team work, confidence building and learning to push themselves past their limits,” says Judi. 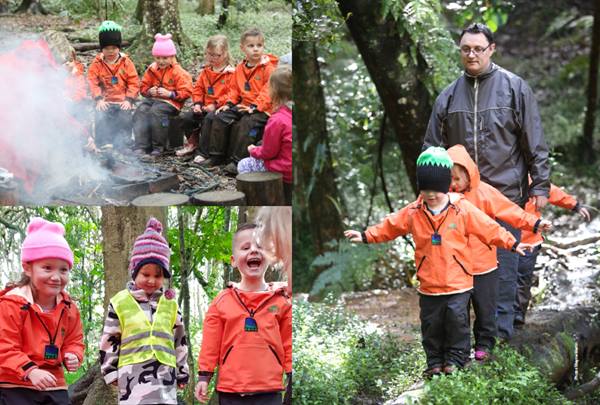 “We really try not to say, ‘be careful’ because that will often stop children rather than encourage them to think about what they are doing. A lot of them are very cautious when they first come and it’s lovely to see them grow in confidence.

“They also build very good relationships with each other and give each other support which they bring back to kindergarten with them.”

Whether tramping through deep leaf mould, slipping down muddy banks, climbing up muddy banks using a rope or splashing about in the creek, it’s clear they love being outside whatever the weather.

“We have seen the crysalises and holes where puriri moths have come out from the trees. Fungi is another thing that is always changing, appearing on logs in such a range of colours and forms. The children are really interested and excited about these discoveries. Nothing can buy that kind of experience.”

Also encouraged to climb trees and get very, very muddy (teachers, reporter and the photographer too), for these youngsters it is a must-do activity in winter.

The nearest thing to life in the material world is an area known as the playground where rope swings hang from branches and old tree trunks double as dinosaurs to clamber over. Here imaginations are at their most inventive as nature transforms into whatever magical creature the children conjure up.

Judi has taught at Mason Avenue kindergarten for 16 years and rates the nature discovery programme as one of the most exciting innovations in early childhood education during her career.

“There’s so many rich experiences and so much learning available to children when they are in touch with nature and the environment.”

The programme couldn’t run without the help of parents, with two being rostered on every visit. Judi says the adults have as much fun as the children and enjoy being far removed from the hustle and bustle of everyday life.

On the day of my visit, dads, Chris McDowell (father of Toby) and Alan Murray (father of Abigail) were the willing helpers.

“Toby loves coming here but this is my first visit,” says Chris. “I think it’s important for dads to become involved. This experience is not something the children would get by sitting inside all day.”

Alan Murray had also taken the day off work to join Abigail on her last day before starting at Kingsgate School. “It’s a fantastic opportunity for kids, teachers and families to get close to nature.”

Finally, muddy hands washed in a bucket of water, the children settle down for a sausage sizzle and cup of Milo next to the campfire which heavy rain fails to put out. Thanks to the natural canopy provided by mature, towering trees, the clearing remains mostly dry.

It’s truly a magical place and thanks to the children from Mason Avenue Kindergarten its natural beauty will be preserved and cherished for years to come.

Seek and will you find?