Long school holidays may be welcome but inevitably parents are sure to hear those dreaded words, “I’m bored”. However, HELEN PERRY has discovered a new book, designed by a young Aucklander, which should keep curious children happy for a couple of hours at least! 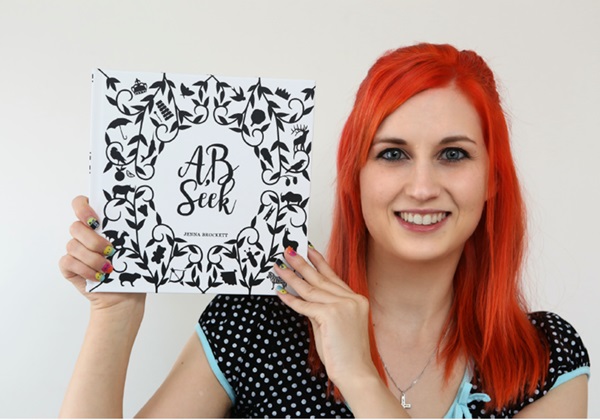 Spy with my little eye something beginning with A, and B, C too and, of course, D. In fact, with every turn of the page in Jenna Brockett’s new book, A, B, Seek, the idea is to detect all sorts of animals and objects lurking in a black and white network of leaves.

“I started the book in 2015 after first experimenting with just one letter, the letter M,í says graphic artist, Jenna. “People loved the idea and I could see the potential of using the whole alphabet to create an educational book which would test children’s powers of observation.”

“However, the ‘I Spy’ theme came from separate artwork I was already playing with using fairy tales and TV shows as the catalyst for finding hidden objects. I originally created pictures on a large canvas then sold them as A4 posters and also as cards but the book has been a much bigger project.”

All the original pictures for A, B, Seek were hand drawn with each letter taking Jenna about 20 hours to plan, design, sketch and draw.

“Along with each image there is also a list of the hidden objects on the opposite page. Each page deals with one letter of the alphabet so all the objects start with that letter. Some are quite tricky; not as clear cut as children might think.”

With more than 1000 images to find hiding amongst the 26 letters, this book offers hours of fun especially when some quiet time, away from technology or vigorous play, is called for.

What’s more, the book can be explored two ways – by looking at the word list then finding the corresponding items in the picture or by studying the picture and writing down as many hidden objects as possible before comparing them to the list.

Aimed primarily at children aged two to 12 years, nevertheless many people have added the book to gift parcels for newborns, recognising that the black and white images provide early interest and stimulation for babies.

With a bent for art, and crafts too, which showed up at an early age, Jenna pursued art at school then followed a career in graphic design.

“But I’m also pretty handy with a hammer and nails – I like woodwork – and with needle and thread. I enjoy exploring my creativity,” she says. “I’ve dabbled in several mediums, but I prefer to draw so preparing the book was especially pleasurable. Now, I’m working a cloth nappy design so that’ll be different!”

While A, B, Seek (RRP $30) is available from selected bookstores, Jenna mostly sells from her online site – www.prints-princesses.co.nz or at weekend markets. Free delivery New Zealand-wide when entering the code RURAL LIVING

House on the hill far from madding crowd