Magic moments can last a lifetime but they can also be responsible for making a living, as JON RAWLINSON discovered when meeting local magician, Mick Peck. 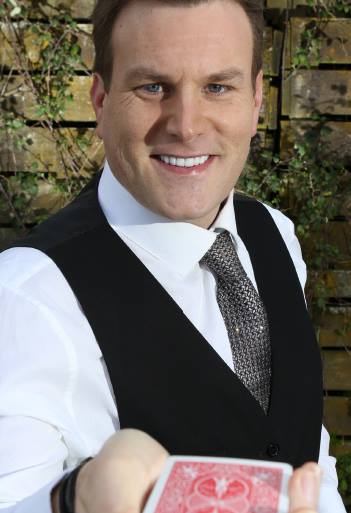 Interviewing a professional magician is bound to result in just a few tricks of the trade being revealed, or so I thought. However, Pukekohe local, Mick Peck, is (understandably) tight-lipped about showing his hand, leaving plenty up his sleeve.

“I don’t give away the secrets,” he tells me. “It’s a bit like when we’re young, we’re amazed by Santa until we find out it’s just dad with a pillow down his front. I believe that there are some mysteries to be solved and others which should be savoured.”

In fact, the most amazing aspects of magic are those which are designed to be shared by only a lucky few.

“The difference between magic and other performing arts is that you spend a lifetime hiding what you learn. I know guys who have spent 30 or 40 years perfecting a slight-of-hand technique with the sole intention of ensuring that technique is invisible to audiences!”

A true appreciation of the hard work and skill which goes into magic can only be attained by those within an intimate circle, a Magic Circle, to be exact.

Since 2014, Mick – one of just a handful of fulltime, professional magicians who ply their trade in New Zealand – has been a member of the Magic Circle, an exclusive, London-based club for the world’s best.

Despite reaching the top of his profession, even ‘magic Mick’ can blow a trick now and then. However, the show must always go on.

“When an amateur gets something wrong they’ll get flustered and blow the trick. But a professional can go to a plan B or plan C, change the ending perhaps, and, if they’re good enough, no one will ever know that it’s not all just part of the act.”

While Mick has dealt with his share of sceptics over the years, conjuring up crowd-pleasing performances comes down to audiences being prepared to let go and enjoy show.“There’s a lot of psychology in magic. A big component is having the audience on side. If they like you, they’re willing to suspend their disbelief. That’s why I do comedy to first warm them up.”

He says younger children and adults are most likely to allow themselves to be amazed; older children can prove ‘tricky’.

“Up to a certain age, kids believe in magic – they just think you’re a wizard like Harry Potter. Once they reach 10 or 11, they’re more inclined to take a magician down a peg by trying to figure out a trick. But, as long as they know you’re there to entertain them and have fun, it’s not so bad.”

Although children were among the first to witness his antics, these days Mick primarily performs for adults during corporate events.

Asked if he believes in magic, he is quick with an understandably diplomatic (if not philosophic) response:

“People used to be amazed by medicine men shaking bones and that’s transformed into the comedian, the magician and people like that; it’s all entertainment, isn’t it? Oh, and you could add politicians to that too, in a way!” he smiles.

“If you can be responsible for taking away someone’s problems for half an hour, that’s a kind of magic, I think.

“It’s no different from a movie or a comedy show; it allows people to forget their problems and enjoy themselves.”

Despite his reluctance to reveal any stage secrets, Mick is prepared to explain just how a trickster from Pukekohe managed to make a go of show business.

“I think the main reason I succeeded is that magic is really the only thing I’ve wanted to do for a living since I was 12, and, mostly, because I just stuck with it.”

Taking to the stage

Since first treating audiences to his fistful of tricks, Pukekohe magician, Mick Peck, has never ceased to amaze.

“My first magic show was as a student during a fundraiser at Pukekohe Intermediate School. That was a trial by fire because they wanted a full 45-minute stage show. It was very ambitious for a first performance,” he recalls.

“My heroes weren’t All Blacks; they were the Two Ronnies, John Cleese and Paul Daniels. For me, it’s not just about the trick; it’s about making the trick entertaining. Magic without showmanship is just a puzzle and puzzles aren’t that entertaining!”

By the time he was 15, Mick was already a semi-professional, performing at birthday parties before tackling magic full-time.

In 2014, he became a member of the Magic Circle. Few are invited to join – and no, the invitations are not couriered by owls, he confirms! – and any who give away secrets are liable to be unceremoniously ‘cast’ out.

“In the backs of all the magic books I used to read growing up, there were listings of new members, so the Magic Circle was a bit like Hogwarts for me. It was a real honour to be able to join,” says Mick.

“Being a member shows that I am serious about my profession; I’m not just someone who performs magic as a hobby. It also allows access to the world’s best. And, as the circle has a library of around 6000 books (many of them rare) and weekly lectures – members overseas can access them online – it provides incredible opportunities to share and learn.”

Mick is also a member of the Auckland Brotherhood of Magicians, which has helped Kiwi professionals hone their craft since 1945.

Seek and will you find?

There’s something about Mary