If the skies are big and deep in the heart of Texas, they have no limit when viewed from the cockpit of a T-6 C Texan II! JON RAWLINSON spoke with Pilot Officer Paul Robinson about chasing his dream to catch the stick. 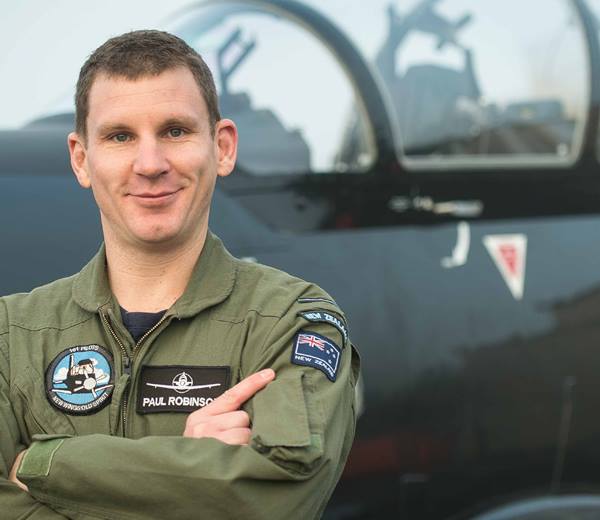 Growing up in Glen Murray, Paul Robinson was never ‘grounded’; and now, with the world sometimes quite literally beneath his feet, there’s even less chance of anyone keeping this good man down.

“I don’t ever recall my parents grounding me for anything. Having said that, there’s not really anywhere to go in Glen Murray anyway!” the former Glen Murray Primary student jokes. Paul is now undergoing pilot training after serving with the Royal New Zealand
Air Force (RNZAF) since 2003. While he hasn’t seen much service in war zones – aside from maintaining aircraft operating in Afghanistan – many would consider flying alone to be synonymous with danger.

However, with two sons in the military, Paul’s parents (Kim and Evelyn) have likely become accustomed to their boys being engaged in dangerous professions. “I guess there’s an element of concern but [my family] trusts that the training is robust and that we’re prepared to deal with emergencies and dangerous situations,” he says.

My brother, Bob, spent time in Afghanistan. He was actually in bomb disposal, so Mum was probably more nervous about that than me flying!” The son of a cattle and sheep farmer, Paul adopted his father’s interest in aviation.

“My dad was into aircraft – he started on his PPL [Private Pilot’s Licence] but ran out of money. When I was about nine or 10, he arranged for a local top dressing guy, Les Marshall, to take me for a ride in his old de Havilland Beaver. That was it, I was
hooked!”

However, seeking military over civilian wings was as much down to a martial tradition as being the result of a ‘Marshall’ experience.

“My brother’s stories interested me so I looked to combine flying with a military career.

Both my granddads and one of my great-grandfathers served in the world wars. While they didn’t tell many stories, we always had photos of them in uniform, which kept the idea of military service in my mind.”

In 2003, when Paul wasn’t accepted into pilot training, he joined the Air Force regardless, becoming an aircraft technician – while many apply, few are entrusted with the service’s finest war machines. In 2013, he again applied for pilot training and was accepted.
“I was disappointed on missing out first time round because I’d been working towards being an Air Force pilot throughout my school years; that had been my big plan. But, in the long run, all it really meant was that I learnt how to fix them before I learnt how to fly them,” he explains.

“I thought I’d give it one more go before I was too old. It was either have another shot or shut the door on that. To achieve my childhood dream was a very special feeling. I was excited, nervous and proud all at the same time.”

The T-6C Texan II aircraft Paul’s flying in training are “hugely” more powerful than anything else he’s flown. And yet, it’s likely another bird that will have him in a spin
soon enough.

“When we’re done with training, we get two options, although it’s all down to what
the Air Force needs and how well you’ve done on the course. “You either go on to fly Hercules or [Lockheed] P-3 Orions, or A109 and NH90 helicopters. I’m keen to fly helicopters.”

Meanwhile, he believes his technical background has come in handy, helping him better understand the capabilities of aircraft and how to handle them when faced with mechanical issues. Looking to the horizon, Paul’s yet to set a course beyond the force. “At this stage, I’ve no plans for life after the RNZAF. I’m pretty comfortable here and we get a 10 year return of service on completing this course, so I won’t be making any moves for the next decade at least.”

On the home front
The life of a fly boy often results in loved ones being passed like ships in the night. However, for now at least, Paul can spend plenty of time with his wife, Fiona, and two-year-old daughter, Isla.

“We’re living in married quarters at Ohakea [Air Force base] so I spend more time with them than perhaps the typical husband and dad. But once I’m qualified, I’ll be heading away on deployments and exercises so I could be months away at a time.”

Although Paul expects it will be tough flying the nest once he earns his wings, the RNZAF
provides strong support networks to assist family of personnel who are away from home.

“I think it’ll be pretty challenging,” he says. “I guess we’ll just try and support each other as best we can and make the most of the time we do have together.”

Of their finest hour
According to one Mr Churchill: “Never in the field of human conflict was so much owed by so many to so few.”

Among those few who flew in the Second World War were many young Kiwis, fighting in skies far from home. Even if Pilot Officer Paul Robinson is not directly involved in Battle of Britain commemorations this year (usually held in September), he can’t help but reflect on the sacrifices of the fabled few.

“It really depends on how training is going, but as they are trying to get us through it as early as possible, I’m not sure [I will be involved],” he says. “New Zealand has a proud history of aviators so I do think about what they went through and draw inspiration from
what they achieved.”

With (thankfully) no field of conflict to rush to, Paul believes it improbable that he will be called to serve in a war zone anytime soon. However, he remains ready to step up (way up!) to do his duty.

“Our Air Force supports the Government’s view that people abide by international rules, and our defence force is our way contributing to global security, working with our allies to
maintain that,” he says.

“If I was ever sent into a combat situation – and it’s highly unlikely – I’d be comfortable knowing we were there for the right reasons.”

The little railway that could!