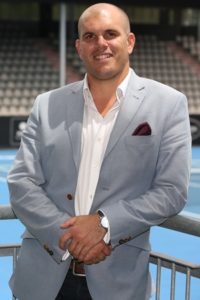 From ‘Serena-gate’ to Jack Sock (fittingly) claiming the men’s title, the recent ASB Classic served up plenty of drama. However, behind the scenes a former Pukekohe local was pulling the strings, as JON RAWLINSON reports.

While some sports may struggle to put bums on seats, or satisfy palates of fans in the stands, the Auckland Open (ASB Classic – men’s and women’s) has been routinely netting first rate financial returns. By providing a satisfying experience for players, sponsors and fans, tournament director, Karl Budge, is tasked with ensuring Tennis Auckland’s cash cow continues to make with the milk.

“I don’t want to compare our tournaments to just any other international; I want to compare them to Wimbledon. If we do that, the rest will take care of itself. We’re leading the women’s tour and we’re right up there with the men’s in terms of how to run a successful, modern tournament – that’s what gets me out of bed in the morning,” Karl says.

“When I took on this role, I was told: ‘it’s not a grand slam.’ I used to be head of sponsorship for a grand slam [the Australian Open], so trust me, I know! But, if we act like it is, we might just become the best WTA [Women’s Tennis Association] international event, or (who knows?) the best summer event in New Zealand.

Once all the sums are done, Karl expects the Classic will deliver its best ever returns, netting some $2.5 million. While many top seeds (including the Williams sisters), failed to fire, he believes they were as successful on court as in the counting house.

“No one thought Serena or Venus Williams would ever play in New Zealand… Christ, we had the women’s world number one playing here, that’s pretty phenomenal! If we could go back to January and know how it was going to play out [with Serena knocked out in the second round] wouldn’t you take it? Of course you would!

“The only time you’re guaranteed to see a star player is in the opening round. That’s why we’ve invested so much [off court] with music and food, so that it’s a great day out regardless of who’s on court.”

Karl has a point. If the world’s best always won, sport would be pretty damn boring!
With regards to the Williams sisters’ controversial hotel bill – reported at more than $30,000 – Karl says, thanks to contra agreements, Tennis Auckland’s net cash contribution was insignificant.

“That was a storm in a teacup! We put them in Sky City for a reason; we get free rooms there… the real impact of that bill was negligible and in line with amounts expected. Sky City does plenty of business from the ASB Classic each year, so, if they have to give away a few free hotel rooms and food, they’re pretty happy to do so!”

To further ‘square the ledger’, he asserts Serena’s remarks about windy weather – experienced during her notorious second round defeat – resulted more from disappointment in her own game.

“It was just a case of a player being pissed off and lashing out… she lost a match she knew she shouldn’t have. I’m sure Serena will remember that wind for as long as she lives, but weather’s weather and she won’t hold that against us.

“I caught up with her in Melbourne [during the Australian Open] and our relationship is fine; I’ve known her for 12 years and it’s not going to change. I think there’s a strong chance she will be back next year; she won this year’s Australian Open after playing here after all!”

And with plans for a new stadium with retractable roof under way, the prospects of attracting stars in the future look good.

However, to a certain extent, Karl’s role will always require he play nursemaid to the stars and supplying a certain type of water or chicken soup (or even a karaoke machine for Serena!) is a small price to pay to ensure they’ll return to play another day.

“I’d rather players come and ask than walk away disappointed. It’s all part of developing close relationships; most know they can come have a whiskey in my office with me at night. It means, when deciding where they’re going to play next time, I know we’ll be in with a shout.”

The Classic’s success stands in stark contrast to New Zealand’s low club numbers. And, at the highest level, Marina Erakovic alone is the only Kiwi close to cracking the world’s top 100. Encouraging youngsters to kick the football into touch and pick up a racket is “critical” to the success of tennis here, Karl believes.

“We’re often judged by how many top players we create, but I look at it differently. Last year, a dozen kids or so secured scholarships in the USA; we have a real success story building, but we’re not doing a good enough job telling it.”

By serving as a shop window for tennis, the ASB Classic is bringing “everyone’s second-favourite sport” to the fore in our own backyard, Karl contends.

“I’m a dollars and cents guy. It’s not strictly that un-emotive, but these tournaments are our biggest fundraising tools… to some extent, I measure my success by how much we generate.

“We’re always going to struggle to produce talent because our best athletes aren’t playing tennis, and for every Maria Sharapova or Roger Federer, there’re a thousand who don’t make it. We have to turn social players into high performance players; that’s the journey we have to take.”

Former ‘Counties kid’ Karl Budge has negotiated the corporate ladder with aplomb rising to manage one of New Zealand’s premier sports events. And yet, when asked about rumours linking him with Tennis NZ’s CEO spot, his Kiwi humility is immediately apparent.

“I’m always asked about next moves but I don’t like talking about it. I might have a profile but…” despite Auckland Tennis’ boardroom being inhabited by us alone, he leans in to whisper: “I’m just doing a job!” He grins like a kid who’s pulled the wool over the world’s eyes.

“I think I’m motivated by a chip on my shoulder, When I left school at 16 some wouldn’t have thought I’d go on to achieve what I have. I kinda like that; I like being the underdog.”
Tennis NZ’s top dogs could do much worse than to bark up this particular underdog’s tree.

Karl’s road to Tennis Lane may have involved a much less direct route from his old hometown of Pukekohe than the Southern Motorway could provide, but that’s where it began.

“At school, I remember Mr [John] Murdie telling me to stop talking sport, that it’d never get me anywhere,” Karl reflects. “But, as I said to the kids when I returned for last year’s prize giving, that’s bollocks! To me, passion outweighs everything; it will get you everywhere!”

As a youngster, Karl played rugby, tennis and cricket, developing skills which would later serve him well. “I played a lot of cricket, and wanted to take that further. I thought I was probably good enough, but I now realise just how far away I really was,” he says.

“However, sport gave me confidence – that I was more than just a small town boy – and insight into people. That’s the beauty of sport; you mix with people from all walks of life, while learning structure, leadership and discipline.”

While I’ll leave the details to his future biographer to divulge, suffice it to say that he has worked in a variety of roles around the world, with the WTA (Women’s Tennis Association), the Australian Open and the Oceania Football Confederation, to name a few.

Today, with five ASB Classics under his belt, Karl’s more settled. It seems that this Budge won’t be budged from his current position anytime soon.

“I’ve worked all over the world [but] I’m in a different space in my life now.” He pauses and looks down at the court from a boardroom where he often holds court. He continues: “I’ve had opportunities elsewhere in the world but I’m lucky with this role. The Classic is big enough that it can make an impact but small enough that I can do plenty of cool stuff with it!”

Eagle-eyed golfer still in the swing