Well, here we are at long last with some summer weather although the wind has made sitting around the pool a bit unpleasant at times. We are now waiting for our ‘super summer’ so we can really enjoy our surrounds.

Of course, the problem with long, dry periods is the drought conditions which will inevitably occur. The South Island is already suffering such conditions so we are hoping for some summer rainfall, too. This will assist our local farmers and growers, not to mention household lawns!

A good balance of fine, hot weather with rain would be nice as, since shifting house last February, we haven’t experienced any really good weather until just prior to Christmas. Here’s hoping! 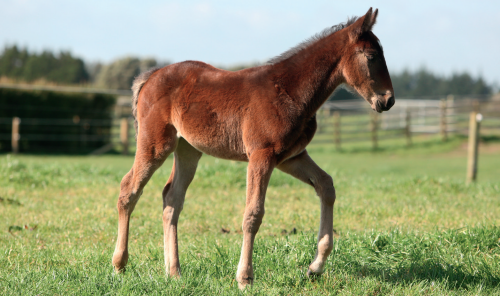 This is also the time of year when we announce the winner of the Name the Foal competition. We were thrilled by the huge number of entries and the great variety of names submitted. We also received some splendid comments which made it so worthwhile to run the competition.

In particular, we felt we needed to publish one lovely letter from John Alderson:

Yes, your delightful filly, so upright and well formed, deserves an excellent name such as:

The mare, Willowbrook, looks so calm, contented and very proud of her progeny.
Our family were in the pacing fraternity. My brother Ron and his wife, Dell named one of their horses, Rondel, after their first names. This dear horse won the Interdominion Pacing Championship at Addington in 1979 and won our hearts and love for many years. In fact, the cover he won at the Interdominion is on my bed in Karaka.

Although John didn’t win, we thank him for taking part and sharing his Rondel story.

Tony Dickinson (fellow judge and shareholder in this delightful filly) and I took ages going through all the entries before making our final choice. Any of the people mentioned might have taken the prize, however, that honour went to Margaret Glass from Tuakau.

Margaret selected five names and her husband submitted three. Her winning name was, Willsherocknroll. The filly was by A Rock n Roll Dance from Willowbrook hence the name – so, congratulations, Margaret, your prize is coming to you!

As we cross from 2017 to 2018, I’m looking ahead and intend to follow up on food bowl concerns expressed in a previous column and, of course, I’m full of expectations as to what this year will bring.

Meanwhile, it won’t be too long before the start of the Super Rugby season so, Go the Chiefs!

A time to remember